The second attempt at 3D printing a base plate for the πFi went much better but there’s still plenty of room for improvements. Currently I’m testing out sizes for the QR cards and how those sizes effects the necessary distance between the cards and the camera, which in turn effects how large the whole device will need to be. Currently I’m leaning toward a 7,0×8,5 cm large card with a 5,5×5,5 cm QR code centered on the card and this means that the full enclosure doesn’t need to be any bigger in the base than the Pi itself is.

If stand for the QR cards are on top of the USB och Ethernet ports with just a couple of mm of plastic between them, the camera sensor need to be about 55 mm above the surface of the Pi.

If I connect a display to the Pi I can use raspivid to display the output of the camera on that display. The display needs to be connected to the Pi but the command itself can be run either locally on the Pi or remotely via SSH.

This looks like a simple yet functional way to design the cover of the Pi for the πFi. 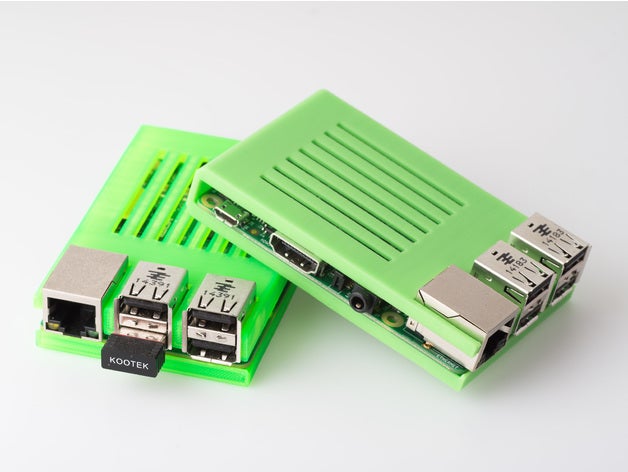 Turns out there where multiple problems with yesterdays attempt at a base plate for the πFi.1 I had the measurements for the QR cards completely wrong, so even if the Pi had fit it wouldn’t have worked.

This morning I drew up a quick 2D sketch in OmniGraffle and then I worked from that one to get the 3D version in Fusion. Hopefully this one will work better. The printer says about six hours to print.

I’m changing things up for the πiFi Music Player.

The way I intended to make the πiFi I would need to do most, if not all of these and it just makes it too large of a project. So I’ve scaled it back. At it’s core it is still going to work the same way but instead of having a built in power amp and connecting it to custom built passive speakers I’m going to make a device that gives line level audio out and connect it to a pair of powered speakers that Iris already have but rarely use.

At first I decided to do this using a Raspberry Pi Zero and a JustBook DAC Zero and that was what I sat down to work on tonight. Unfortunately I realised that the Pi Camera Module needs a different cable to be compatible with the Zero and none of my usual suppliers for these kinds of things have that cable in stock. As I was thinking about whether to keep working on other parts of it hit me, why not use the Pi 3 that I used before but without the power amplifier hat? It has a line out built in and works with the camera cable that I have?

So tonight I’ve been working on the first iteration of a simple 3D printed base plate to mount the Pi on, with place to stick the QR codes on in front of it and a mount for the camera. So far the camera mount isn’t finished but I do have a prototype sketch that should work for mounting the Pi and the QR codes. I’ll try to get it printed tomorrow.

What Mac laptop should I buy?

It’s time for me to get a new computer at work this year. We generally use Macs and we get new ones every three years. From 2015 to 2018 I was using a 13″ MacBook Pro, a computer that I truly loved. I had all the ports I needed (as long as I remembered to bring a Thunderbolt to Ethernet dongle) and it was small and light in my backpack.

Twenty-eighteen rolled around and it was time to decide on a new computer. By that time some of my colleagues had gotten the new USB-C/Thunderbolt 3-only laptops in the previous year and results where mixed to say the least. To give some examples, one of my colleagues absolutely loves here 15″. Another one is quite happy. One likes everything except the TouchBar. One likes his computer but has had to have it serviced multiple times do to keyboard issues. Another one has been serviced because of screen problems. Another colleague abandoned the Mac platform entirely. I felt quite strongly that I didn’t want to get into the potential problems of dongles, keyboards and all the other stuff but I did want to stay with the Mac. Fortunately I had one option, the 15″ late 2015 MacBook Pro was still on sale so I decided on that one.

Since then my computer and me has had an on again, off again relationship. I love the fact that I rarely need a dongle to anything. I love that I can plug in both SD cards and USB flash drives whenever I want. And MacSafe keeps being great. However it is was too big for my taste. The 15″ form factor is really not for me. It has even gotten me to the point where I occasionally get out the old 13″ and bring that one in my backpack. Also for the last six months or so I’ve really felt that this machine (the 15″) is letting me down in terms of speed and the fan noise in Zoom meetings is driving me crazy.

So it’s time to get a new one. When the 16″ hit the market last year(?) I thought I new what the future held in stock for me. I hoped for a similar 14″ form factor and that that computer would be the one for me. Now such a computer doesn’t exist. But the M1 laptops exist and they seem very nice. But am I ready to jump on a new technical platform early on? Will Pro Tools, MediaComposer and similar tools work? Will all my x86 terminal tools be available for Apple Silicon? And most importantly, do I feel like I have the time to figure these things out?

The basic problem that all three have is that they are USB-C/Thunderbolt only. I would really, really like to have at least an HDMI port and an SD card slot. And now there seems to be some rumours about upcoming Macs that might have that. But to I have the time to wait? Last week I would have said yes, at least wait until after WWDC but yesterday I realised that the most likely reason why my 15″ wobbles on the table is that the battery has started swelling and that seems like something that will kill it sooner rather than later.

With that in mind I probably just need to suck it up and head into the USB-C world. And if I do that the Intel 13″ has a distinct advantage in that it has four ports instead of two. Two seems to be very few. Also the Intel one has a know processor architecture. Every piece of software will probably work just as well as on the old 15″, right? Right?!?!?

Well, maybe not because my 15″ is still on High Sierra.

Let that sink in for a moment.

I still use a laptop on High Sierra.

Why? Simply because when Mojave came out I just couldn’t be bothered with checking whether all the tools that I need to do my work still worked or not. I had one small child and one very small child at home and messing with things that already worked seemed like a terribly idea. And then I stuck with that solution. This computer will remain on High Sierra until it dies. This makes it quite possible that the transition to a new computer will be less that smooth even if it’s still and Intel machine.

So the ports then. Four is indeed more than two. And why settle for two when I can have four? Well…

Based on this, getting a new 13″ Intel machine seems like a very small step up from what I have today, but a small step that still brings the hassle of new ports and an os that means I will have to do a lot of compatibility checking. On the other hand, getting an M1 machine almost doubles my single core performance scores and more that doubles the multi core ones.

So a MacBook Pro 13″ with an M1 then? Weeeeeeeeeeeeeeeeeell, if it had four USB ports and the Air only two then the deal would have been sealed. But the port situation is the same for both. And the Air has the added benefit of being fan-less. As I currently hate the fan noise from my computer maybe this is the way to go? Or maybe not having a fan means it’ll throttle the processor way too often resulting in I poor experience in the long term? So that can go either way.

And then there’s the TouchBar, or the lack of a TouchBar. The Air has proper function keys, while retaining TouchID. Even though I’ve only briefly tried the TouchBar on other peoples computers it seems to not be something that I want to have. Potentially cool but as far as I’ve seen there hasn’t been a ”killer app” for it, but there is the risk of accidental input.

It’s a bit anti-climactic but I don’t know for sure which way to go. In writing this text I think I’ve settled on getting a new one as soon as possible, and narrowing the choice down to either the MacBook Pro 13″ or the MacBook Air, both with an M1 processor. Which of those I should go with I still don’t know.

Even though my work concerns pro audio a lot, the Thiele-Small Parameters are something I’m more or less not familiar with at all. But if I read this guide and the specs for the drivers I intend to use for the πiFi Music Player, this means I need to build a completely sealed enclosure with a volume of at least 1,8 liters.

Apparently I haven’t blogged about, and therefore not really done anything about, the πiFi Music Player for over a year. I’m changing that right now.

And I guess the question remains whether this reply to this post on micro.blog will be properly recognised and threaded there.

A think I’ve sort of solved the problem with webmentions. The remaining problem now is that it appears to arrive as a plain mention and not as a reply.

Apparently I broke webmentions when I created my new blog theme. By breaking them I mean they are sent anonymously.

I do remember solving this ones for my old theme but I don’t remember what the root cause and solution was. 😞